Home
Basket
Your basket is empty. 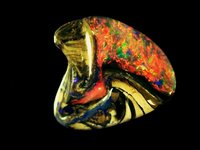 Opal contains every colour of the spectrum, from deepest and clearest blues and iridescent greens, through to golden orange, red and fuchsia; it can be pale and delicate, or dark and brilliant.

Opal is known for its colour and is distinguished from other gems due to its ‘play of light’ or ‘fire’. This refers to the opal’s ability to show a vast array or all the colours the rainbow and are visible in the grains of the stone. When viewed, if the stone is tilted or rotated, the colours may change of disappear due to the change in direction of the light hitting the grain/s. This is what makes the opal so unique and strikingly beautiful.

The most valued of all opals is the Black Opal, of which Lightning Ridge is ’home’ and their inherent value comes from their rarity. Black Opal is distinguished from other opals by their dark background (Body Tone) and this characteristic enables the brightness of colour of which they are known. The ‘darkness’ is the result of the opal is formed on a darker (black) quartz-like layer that enables greater refraction/reflection of the light to the top of the opal, especially the reds and pinks. It is the 'reds' that are more valuable.

To expand the 'play of color' of Black Opal even further, some specimens have a light crystal colour bar on dark opal potch (colourless opal) which gives the otherwise light opal a dark appearance. Even expensive black/dark opals may have only a very thin colour bar on black potch (Colourless Opal).

Compared to Light and Boulder opals, Black Opals fetch a higher price for a given colour, clarity and pattern, due to their scarcity.

Due to its structure, opal may contain any combination of an infinite number of patterns and may reveal itself all at once - glorious from all directions – or it may be quiet and surprising, showing its greatest brilliance only during flashes of movement.

Indeed, precious opal is like no other gemstone because it changes colour as the observer turns the stone.

The formation of opal goes back to the Cretaceous period (145-65 million years ago). During that period the interior of Australia was made up of an inland sea  resulting in deposits of fine marine sands rich in silica being deposited on the ever-changing shoreline. About 30 million years ago, extensive weathering  released large quantities of soluble silica.

Voids and cracks in the ground enabled the silica-rich solution to flow down and these are where the opal forms. Additionally,  plants and animals  laid down in the sediment during the Cretaceous period decomposed, silica  filled these spaces to form the much prized fossilised opal. This process is very slow.

The resultant gemstone is a non-crystalline silica, similar to quartz, but is not a mineral. Its internal structure enables unique diffraction of light to produce white, grey, red, orange, yellow, green, blue, magenta, rose, pink, slate, olive, brown, and black.

Due to the unique nature of its formation, there are no steadfast rules of reasons how and where it is formed and as such, Opal mining is not an exact science. Many people, especially miners, equate opal mining as playing the lottery, but with a lot of digging.

'Composites' are a slice of Light Opal and adhered to a back of black potch, plastic, glass or boulder. While they are popular as souvenirs, they are not investment quality stones and lack the durability of the natural variety with the veneer of the opal and back vulnerable to splitting due to moisture and heat.

Composites can be 'doublets' or 'triplets', with the former being a crystal (clear opal) piece of opal on a black backing, while the triplet is a very very thin veneer of opal, like a doublet but with protective layer glued to the top. Doublets, with generally more opal used in their construction, are generally more expensive than the triplet. Both doublets and triplets must be kept away from water, the glue between the layers can easily delaminate, resulting in a milky appearance, the colour seemingly 'dissapearing! or even totally falling apart. It is very difficult if not impossible to repair a damaged doublet or triplet.

Solid opals, particularly Lightning Ridge Solid opals, can be worn every day....in all applications of life. They are hardy, and are not affected by soaps, shampoos, chlorine or any other daily activities. Enjoy them!